Be informed, not overwhelmed!

…During food preparation, chewing, and digestion, the glucosinolates in cruciferous vegetables are broken down to form biologically active compounds such as indoles, nitriles, thiocyanates, and isothiocyanates (1). Indole-3-carbinol (an indole) and sulforaphane (an isothiocyanate) have been most frequently examined for their anticancer effects.

Indoles and isothiocyanates have been found to inhibit the development of cancer in several organs in rats and mice, including the bladder, breast, colon, liver, lung, and stomach (2, 3). Studies in animals and experiments with cells grown in the laboratory have identified several potential ways in which these compounds may help prevent cancer:

Studies in humans, however, have shown mixed results.

Web MD: What are Phytonutrients?

Phytonutrients aren’t essential for keeping you alive, unlike the vitamins and minerals that plant foods contain. But when you eat or drink phytonutrients, they may help prevent disease and keep your body working properly.

More than 25,000 phytonutrients are found in plant foods. WebMD takes a look at these six important phytonutrients — and their potential health effects:

According to the review of 30 years worth of literature on the topic, the following 10 natural substances have been demonstrated to be the most effective chemopreventive dietary agents against CSCs:

The researchers described the discovery that phytochemicals can selectively target CSCs as “a milestone in the improvement of cancer treatment because the synthetic anticancer drugs that are currently used are often highly toxic for healthy organs and weakens the patient’s immune system.”

A Plant-based Diet can be Affordable

“One thing I hear on a regular basis is, “Eating healthy is too expensive!” Unfortunately, eating a whole foods, plant-based diet is seen by many as a luxury they can’t afford, but it doesn’t have to be that way. As I heard Dr. Neal Barnard of Physicians Committee for Responsible Medicine say last year, “It doesn’t get any cheaper than rice and beans!”” (Read more here.)

“Only about one in every 10 Americans eats enough fruits and vegetables, a new government report shows. Just 13 percent of U.S. residents consume one and a half to two cups of fruit every day as recommended by federal dietary guidelines, researchers from the U.S. Centers for Disease Control and Prevention found.

The news on the vegetable front was even worse. Less than 9 percent of Americans eat two to three cups of vegetables every day as recommended, the report showed…” Read more here.

How Phytochemicals Help Protect Against Cancer

“Phytochemicals are a fascinating yet mysterious group of thousands of chemicals found in plant foods. Some protect against cancer when isolated, some are not associated with cancer at all, and many have yet to be discovered. It is known that many phytochemicals, when kept in their natural food forms, can protect us from cancer as they interact with other phytochemicals and the cells in our bodies…” The Physicians Committee for Responsible Medicine 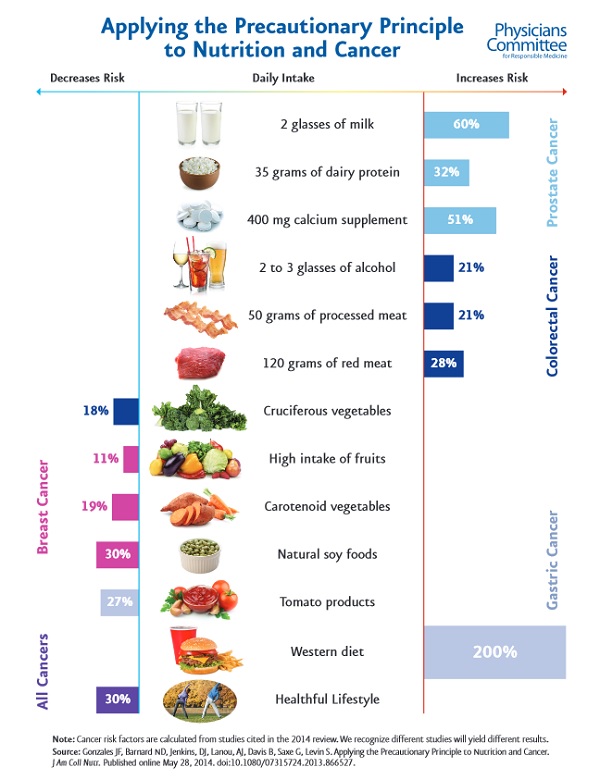 Dean Ornish talks about simple, low-tech and low-cost ways to take advantage of the body’s natural desire to heal itself.

“Whether altered glucose uptake and metabolism could by themselves modulate normal and malignant phenotype and signaling was not known, nor was the mechanism underlying these observations. Our present findings fill a fundamental gap in our current understanding of the mechanism by which glucose metabolism is involved in cancer. Using a physiologically relevant 3D assay and a breast cancer progression series  as well as other breast cancer cell lines, we showed here that overexpression of a glucose transporter in a nonmalignant human breast epithelial cell disrupted polarity and formation of organized tissue-like acini in 3D cultures and upregulated canonical oncogenic signaling. Conversely, forced reduction of glucose uptake by breast cancer cells led to phenotypic reversion of the malignant cells and downregulation of the oncogenic pathways.”

Dr. Michael Greger talks about new research on which vegetables affect cancer most:

“The theory that several carcinogenetic processes are initiated and sustained by cancer stem cells (CSCs) has been validated, and specific methods to identify the CSCs in the entire population of cancer cells have also proven to be effective. This review aims to provide an overview of recently acquired scientific knowledge regarding phytochemicals and herbal extracts, which have been shown to be able to target and kill CSCs. Many genes and proteins that sustain the CSCs’ self-renewal capacity and drug resistance have been described and applications of phytochemicals able to interfere with these signaling systems have been shown to be operatively efficient both in vitro and in vivo. Identification of specific surface antigens, mammosphere formation assays, serial colony-forming unit assays, xenograft transplantation and label-retention assays coupled with Aldehyde dehydrogenase 1 (ALDH1) activity evaluation are the most frequently used techniques for measuring phytochemical efficiency in killing CSCs. Moreover, it has been demonstrated that EGCG, curcumin, piperine, sulforaphane, β-carotene, genistein and the whole extract of some plants are able to kill CSCs…”

TED Talk – Can We Eat to Starve Cancer?

William Li presents a new way to think about treating cancer and other diseases: anti-angiogenesis, preventing the growth of blood vessels that feed a tumor. The crucial first (and best) step: Eating cancer-fighting foods that cut off the supply lines and beat cancer at its own game.

“…many cancer patients are people who have been highly functional and in control of their lives. A cancer diagnosis takes away that control and puts them at the mercy of doctors. In my practice, I try to return to the patient some sense of control by giving them things they can do to take their lives back into their own hands. At the same time I’m also trying to decrease ongoing inflammation in the body, which is at the root of many chronic diseases, and to enlist the body’s innate immunity to fight against the cancer as well as decreasing stress and increasing hope.”

“…a new study conducted by scientists at the Harvard School of Public Health has discovered yet another reason to favor a diet of natural foods – individuals who consume antioxidant-rich fruits and vegetables on a regular basis are also more optimistic about the future.”

by Michael Ravensthorpe in Natural News

Hire Kerin for your group! In person or online. We’ll give you the recipe and a grocery list and meet you in the kitchen. Kerin will share some nutrition info and demo a recipe, and you can make the dish at home in your own kitchen in real time. Like a sing-along but for food! You can ask questions via a chat space too! We can safely practice social distancing AND still learn and eat together! 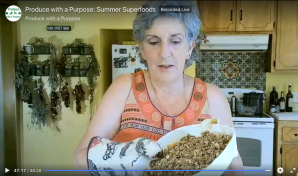