Is “extremely mild” too much of an oxymoron? Climate change has brought us an extremely mild late summer-early fall season, which is perfect for me, a born New Englander, and my dog Pumpkin, who loathes the heat. It’s not great for eggplant and tomatoes. I usually enjoy a resurgence among some plants like beans and a last hurrah from tomatoes that goes well into late October and often makes me turn the field over later than I should. Is this it? Should my broccoli and garlic be in the ground already? Should I be getting ready to cover the citrus trees?

As a micro-farmer who plants for variety, I have built-in flexibility and resilience. Large producers, however, had a late spring, a slow start getting plants going, and now may see an early fall. Predictability affects their sale prices, contracts, soil amendments and labor, and the many variables that go into producing food for us. It’s a big puzzle, and the parameters keep shifting around. The jet stream, that ribbon of wind that circles the globe, used to undulate gently, giving us our patterns of weather. It has gone haywire. Weather predictions, like the Old Farmers’ almanac use the past decades’ weather records to make predictions, but who could see these wild contortions coming? Even for myself, the lack of predictable weather means some of my seed choices and planting plans will be mocked by the weird weather. If you garden, and things didn’t flourish as expected, don’t feel bad – it’s probably nothing that you did. But we should be aware that our food system is facing real challenges.

I am not complaining about the milder growing conditions, even if my late tomatoes and sweet potatoes are taking their time about maturing in the hoop house. This year has seen extreme fires all over California, the largest and most furious on record. Hawai’i is experiencing extreme flooding, and hurricane season isn’t over yet. Death Valley, Australia and India broke heat records this year, while Russia and New England broke records for the coldest temperatures. Coral is bleaching away due to warmer and more acidic sea water, and Florida is seeing extremely toxic algae blooms and terrible aquatic animal die-offs. And the damage to wildlife populations….extreme is the new normal.

I think we must admit that humans have a hand in these events and that recycling cans and ditching straws is too mild a response to undo this extreme mess. If for no other reason than to protect our own food supply and physical safety in the immediate future, we can’t address this mess with tepid, baby-step remedies.

In addition to climate extremes, we are also facing social extremes. (Related?) Extreme inhumanity and an alarming lack of compassion in some cases, where a victim’s otherness is used to justify violence and cruelty. We see extreme greed and selfishness, me-first-ism, and isolationism raised to near cult status. Materialism and economic disparity are reaching extreme levels too. We hear extremely, outrageously dishonest statements daily. Young people witness extreme acts of violence and injustice, enough that it affects their development. Will we accept this as normal?

Just as with climate change, our response to these extremes cannot be mild or wishy-washy. We have to take a solid stand both for the planet and for our fellow beings. We need to say a firm “No!” to extreme toxicity, whether that is between humans or between humans and the planet. 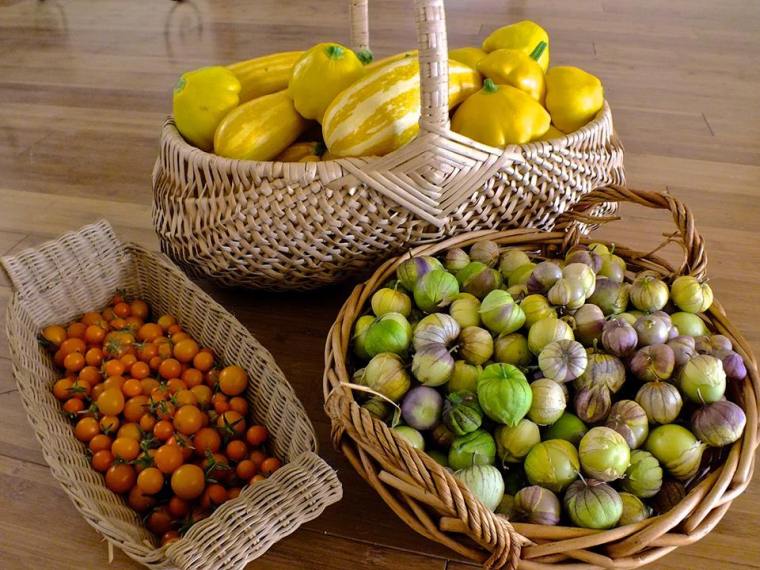 As I have said before, eating mostly produce from small, non-toxic, earth-friendly farms is one way to push back firmly against climate change. Eating that delicious food with other people may help revive our humanity and give us a break from the extremes.

Tomatillos are resilient plants and seem to thrive no matter the weather shifts. And they make a stupendous salsa you can share alongside some (healthy) chips. Use it again the next morning to make Huevos Rancheros! You can make it extremely mild, if you like, or extremely hot!

Wash the ingredients and pat dry. On a flat griddle set on medium heat lay out the tomatillos, garlic and jalapeños. Toast, moving them around, flipping them every few minutes until they are browned on the outside and soft on the inside.

Peel garlic and tomatillos and put them in a blender or food processor. Remove the stem and seeds from the peppers and add them to the blender. Add cilantro and salt to taste, and blend to the desired consistency (chunky vs smooth).

For Huevos Rancheros toast yellow corn tortillas with a little oil on a griddle. Fry an egg or two per person. When tortillas are golden and crisped on the griddle side but soft on the other, serve them with an egg on top of each tortilla and warmed up salsa over the top.