A recent study titled “Top Trends in Prepared Foods in 2017” compiled by research firm Global Data noted a 500% increase in the number of vegans in the United States since 2014. This year’s SacTown VegFest, held January 25th, has continued to grow, filling the ample space at Sacramento Charter High School with 50 vendors, animal rescue activists, environmental and gardening organizations, cooking demonstrations, food innovators, guest speakers, and much more. Visitors reflected the neighborhood’s diversity and included families, students, vegetarian veterans and the veg-curious, and even a pet pig in an adorable sweater. Event organizer_ Glenn Destatte estimated the first Veg Fest attracted about 1,100 people, but this year he expected about over 3,000 people to attend. 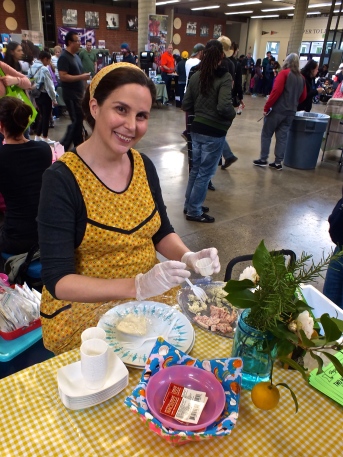 While local entrepreneur Ilsa Hess, owner of Sacramento business Nacheez passed out samples of her latest delicious dairy-free cheeses, other vendors had come from as far away as Southern California (yes, there was carpooling!). Patrick Burwell of Cowhugger.com, a mostly online boutique featuring men’s and women’s non-leather shoes, wallets, purses, said that Sacramento needs more of these events, that the restaurant and shopping options were limited, compared to Southern California. ”Getting more exposure to the vegetarian and vegan community, being able to showcase products like ours and the other vendors out here – I think it’s awesome. It definitely needs more of this kind of events.” Asked what he would say to other businesses regarding vegan and vegetarian options, he responded, “There’s a demand for it out there! There are a lot of people out there looking to go cruelty free, plant-based, save the animals… It’s about your health, about the environment. We really need to start protecting all those things, not just the one area people think about.”

Stina Va, volunteer at Vegan Outreach in Davis: “I love living a compassionate lifestyle and the idea of not harming creatures and people.” Asked if Sacramento was a good place to be a vegan, she said, “Yes! I just moved here last   summer, and partly the vegan-friendly atmosphere of the restaurants was a big factor in why I decided to move here.” Asked for advice for folks transitioning to a more plant-based diet, she suggested the many meat-substitutes, “Just because you don’t want to make a huge, radical shift.” She emphasized that vegans don’t eat just salads and suggested trying an easy, plant-based “chorizo” taco. 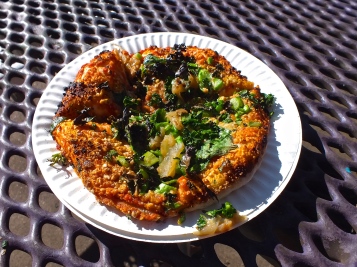 Outside in the garden, Edible Sac High student Sade Rogers: Explained that the students cook healthy food from their garden and that their vegan pizzas have been very popular, so they decided to sell them at the VegFest. The pizzas featured caramelized onions and fresh greens , and were very reasonably priced. The student cooks and their mentors prepped them and baked them in their brick oven, barely keeping up with orders. Asked if she thought this kind of cooking could be a career future for any of the students, she said, “I do, I really do. I did my first vegan festival last year, and when Miss Karen [the program’s teacher] told me, I said, ‘I don’t know. I never heard of vegan before. I don’t think it’s gonna sell.’ Then when we got the hang of it, and it started to really come in, we actually made a lot of money last year. And everything we do is a fundraiser, we put money back into the program…I definitely think it does open up more business opportunities. There definitely need to be restaurants that are actually healthy, that don’t just promote it and lie about it…Some of my family has had bad experiences with some restaurants.”

Not every group tabling at the event was committed to a plant-based lifestyle, but overlapping interests brought in groups concerned with the environment, reducing plastic waste, and even generating energy right at the gym. Jamaar and Julian Powe and Mwangi Staley were promoting their organization, Green Tech, which has the youth building gardens and planting vegetables like cabbage and peas. They are learning about hydroponics, and Mwangi talked about their system’s fish: “They eat up the food and poop, and it’s actually good for the plants!” Asked what they think about eating more produce, Mwangi replied hesitantly, “Me, myself, I’m a meat-lover a little bit. But occasionally I would eat vegetables. We made a lot of stuff [at Green Tech] and it was good…We made our own kale chips and those were pretty amazing.” What does it take to get these young men to eat a vegetable based meal? “I’ll eat a salad,” the Powe brothers concurred. How about a vegetarian lasagna? The three colleagues agreed, “If it tastes good I’ll eat it.” Mwangi said he “tried an organic wheat cupcake with tomato and no sugar and it wasn’t too bad. It was new to me, though.” Is it just that this doesn’t taste like Mom’s cooking? Yes, they all admit. “It’s still good though!”

Certainly, plenty of people were trying new flavors, from non-dairy ice creams to Ethiopian food, to Vegan fried “chicken” and non-dairy Mac and Cheese, special croutons, kombucha, hummus, and non-dairy butter – and the lines were long at each food location. What more can a Veg Fest ask for than folks who are willing to try new options?

As Glenn Destatte pointed out, the plant-based diet promoted at Veg Fest interconnects with Sacramento’s Farm to Fork movement and concerns for the environment and climate change, local eating and vegetable gardening, farm workers’ well-being, health, and animal welfare. By informing Sacramento about the benefits, he hopes to inspire “More people adopting a whole food, plant-based lifestyle, which is healthier for everybody.” It looks like there’s room for this movement and this event to grow!